After capturing data, you can upload it to the internet and then download the data to a desktop computer for analysis in, for example, a spreadsheet. Perfect for school projects!

The associated micro:bit coding tutorial will teach you how to send sensor data from your micro:bit to Bitty Data Logger running on a smartphone or tablet over Bluetooth. 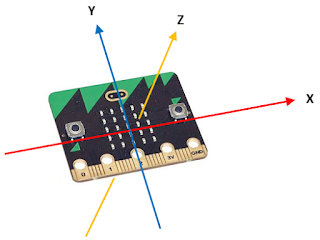 The micro:bit uses values which are in multiples of one "milli-g" i.e. one thousandth of the acceleration due to gravity. Bitty Data Logger scales the values up to be relative to g itself.

Magnetometer data is available over Bluetooth from the micro:bit in two forms.

In the first form, simply entitled "magnetometer data" in the Bitty Data Logger application, magnetic forces are expressed as a collection of X, Y and Z vector values very much like the data we can obtain from the micro:bit accelerometer. The vector values measure the strength of magnetic force in the following three directions:

You can calculate the overall magnetic field strength from these values using a simple mathematical formula:

It's also possible to obtain data which provides a 'bearing' measured in degrees from magnetic north.

When you first power up your micro:bit after installing a hex file which supports magnetometer data over Bluetooth, you will be prompted to "draw a circle" by a message which scrolls across the display. Hold your micro:bit so that the display is oriented in the vertical plane and then slowly rotate it through 360 degrees. You should see a single LED pixel lit and it should move to the bottom of the display with respect to gravity. This strange process involves collecting both data about magnetic fields in the local environment and motion and results in your micro:bit being properly calibrated for use in that environment.

You can connect external devices such as temperature sensors, motion sensors, light dependent resistors and so on, to pins 0, 1 and 2 and bitty data logger will periodically sample values from those pins and chart the data over time. This is a great capability for science and engineering experiements and education.

Data from pin connected sensors can be charted in raw form or in millivolts or you can associate mathematical formulae with each pin and bitty data logger will derive the values to chart by evaluating your formulae live, as each data point arrives over Bluetooth. You make this choice in the Settings screen after connecting to your micro:bit and before you start capturing data.

The micro:bit APIs include the getAnalogValue() function. It returns a value in the range 0-1023 and this is what's meant by "raw" data. In fact the reciprocal of the raw value represents a fraction of the maximum voltage, which in the case of micro:bit is 3.3 volts or 3300 mV.

You guessed it. If you select the millivolt format for a pin, the raw data will be converted into millivolts using the reference voltage from the Settings screen which by default is set to 3300 mV.

The raw data value for each selected pin is available in a variable called p0_raw, p1_raw and p2_raw for each of the pins 0, 1 and 2 respectively. If you select the Formula format, you must then provide an expression to be applied to the raw data acquired from that pin. Usually this expression will include the raw data variable for this pin.

For example, with a TMP36 temperature sensor connected to pin 0, the following formula will convert the raw data obtained by reading the pin value to a temperature in degrees celsius: 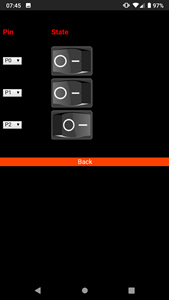 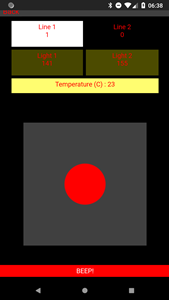 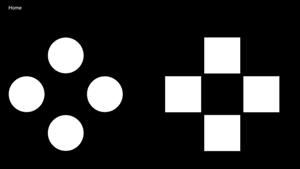 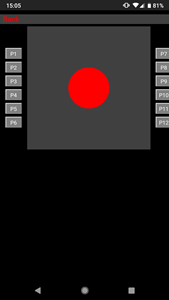 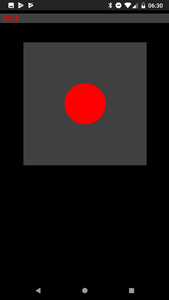 The 'bitty controller' app acts as a Bluetooth remote control for things connected to a device like a BBC micro:bit, Arduino or Raspberry Pi. Basically, you should be able to use any programmable micro-controller, developer board or computer which has Bluetooth Low Energy (LE) support inside or added to it in the form of an external module.

Bitty controller gives you a choice of user interfaces too, so you can select a style of interface which is best suited to the machine you wish to control. Available interfaces include a classic dual d-pad game controller an analog touchpad, which gives you finer-grained control, an enhanced touchpad which can include data from up to 5 sensors and has an extra button, a version of the touchpad UI which can include up to 12 configurable buttons and.... a UI which provides 3 on/off rocker switches. In short, you should be able to find a control UI which is a good fit for your maker project.

We have ready-made example and template code for various device types in our GitHub repository.

In all cases, micro:bit code must include the Bluetooth event service. This is included by default in  MakeCode projects. Event codes and values used by the D-pad and touchpad controller UIs are as follows:

Sensor Values
These events may be sent by the micro:bit to Bitty Controller. The value field contains a 10 bit sensor value in bits 0-9 and a 3 bit sensor number in bits 10-12. The sensor value must be in the range 0-1023, with 0 representing the minimum value that sensor can deliver and 1023 the maximum. This allows sensor cells to be colour coded according to where a received value is in this range. Formulae which can be set from the ioptions screen can be used to translate these raw values into something more suitabled for display.

Bitty Blue is no longer available

Bitty Blue provides a collection of fun things to do with a BBC micro:bit (or compatible device) and Bluetooth. Play with 3D "PolySquiggles", use your micro:bit as a compass, have fun with the micro:bit's buttons, design patterns and send them or text to the micro:bit LED display. You can also monitor the temperature and get alerted if it gets too cold or too hot or just send messages from your micro:bit to your phone to be displayed. Lots of fun and educational too!
This application is available for iOS and Android smartphones.

Note that with the standard bitty data logger installed on your micro:bit, you will need to calibrate the internal ditigal compass whenever your micro:bit starts. Follow the on-display instructions. 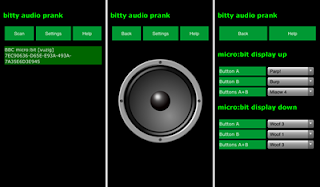 With the 'bitty audio prank' app on your smartphone or tablet you can make it emit surprising and funny sounds just by pressing buttons on your micro:bit in various ways. Communication between the micro:bit and smartphone is wireless using Bluetooth so you could hide your smartphone in a room and have fun watching friends and family react when they hear unexpected sounds coming from unlikely places :-)

This application is no longer available

Hang a micro:bit on the Xmas tree or somewhere else, equally festive and remote control LED animations and (with suitable hardware), Xmas tunes!

Bitty Xmas Bauble lets you choose from any of 6 LED animations and 3 Xmas tunes to have your micro:bit perform. For audio, you need a piezo speaker connected to pin 0 and GND or better still, we recommend using a Kitronik MI:power board which neatly holds a battery and has a pretty good audio chip built in. Here are details of the MI:power board.

You only need to connect your smartphone or tablet over Bluetooth to the micro:bit when you want to change what it's doing. The rest of the time you can just leave the micro:bit to get on with being amazingly Christmassy!

There's even an emergency stop feature built into the micro:bit software. Yes, we know that not everyone is quite as into Xmas as you are and that a quick way to stop that delightful Xmas tune might just come in handy. So we programmed the buttons on the micro:bit to stop the current audio and LED display immediately.