Bitty Software will soon be launching a new system which will make it possible for educators to use applications like Bitty Data Logger in a completely new way and involve the entire class.

The current Bitty Software mobile applications for the BBC micro:bit have proved popular with teachers and STEM ambassadors, allowing invisible physical  phenomena to be visualised and analysed, robots to be programmed and remote controlled and coding exercises to be undertaken. But the nature of mobile applications and the policy many schools have on the use of smartphones in class has meant that the applications were only really available to the adults in the room, typically teachers. That's all set to change with BittyWeb.

BittyWeb makes the Bitty Software applications available on PCs running Windows 10 or Linux, and on Macs, Chromebooks and Android devices, in all cases from within a web browser. Yes, all you need is the Google Chrome web browser running on a PC, laptop, tablet or smartphone which has support for Bluetooth 4.0 or later and you're all set to run some of the most immersive and inclusive science, technology and coding classes ever!

To use BittyWeb, organisations will need to register for an account and subscribe to use the system for a certain duration (e.g. 12 weeks) and with support for a given maximum number of concurrent users (e.g. 30 for a whole class). Registering will result in an organisational account being created and a user account for the member of staff who will act as the system administrator for their organisation. That user can then log in and create as many standard user accounts as they are likely to need, typically one for each member of class. Standard user accounts are completely anonymous, by the way.

Version 1.0 of BittyWeb will include the Bitty Data Logger and Bitty Controller applications. Further BittyWeb applications are planned though and we're always open to ideas.

BittyWeb is currently in beta testing and if you'd like access (free of charge of course), please email bittysoftwareuk AT gmail DOT com to discuss.

Here's to the BBC micro:bit in the classroom! 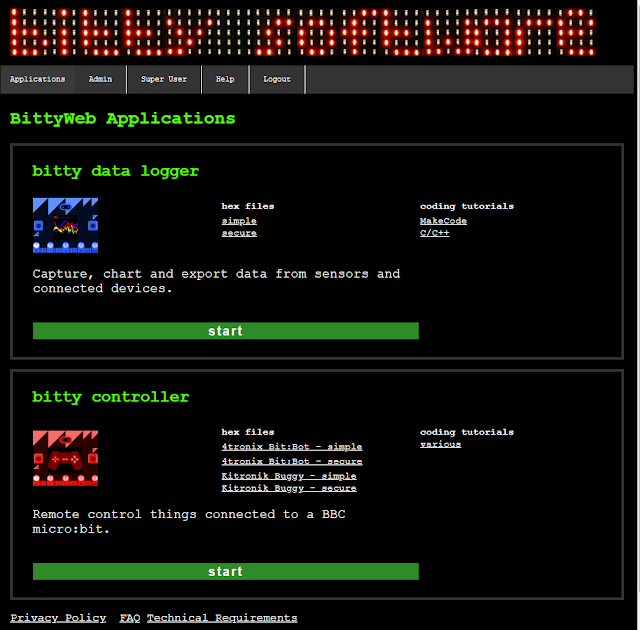