Bitty Blue has a new feature called Message Display. It's a very simple idea but one which has a lot of potential. You can now send a text message over Bluetooth to Bitty Blue and it will be displayed. From the user interface, you can change the font size, the background and text colours and you can decide whether the text should be scrolled or not. If scrolling is switched off, sending more text from the micro:bit will replace the current text. If scrolling is enabled, new text will be appended to the current text.

You could use your smartphone or tablet as a graphical console for monitoring your micro:bit code. You could display messages when something significant happens (but checkout Bitty Event Monitoring in BittyWeb for that as well) or display some kind of internal data like the angle a servo has been rotated to. You could even use the feature to help you track down problems in your micro:bit code but sending messages containing the value of an important variable at points in your code!

Sending text involves using the Bluetooth UART service so you must make sure that service has been included in your code, usually from an "on start" block. Then all you need to do from a MakeCode project is use the "bluetooth uart write string" block to send your text. Here's an example. 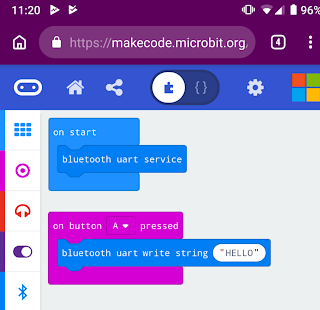 And here's what you see on your phone when (in this example), button A has been pressed. 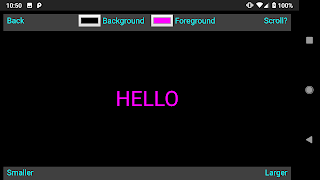